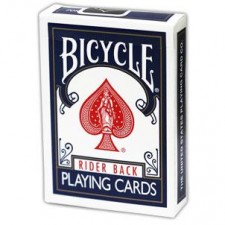 The trick’s title stems from the classic presentation of this effect, in which the magician hands the spectator an imaginary, or “invisible” deck. On being handed the deck, the spectator is asked to mime the acts of removing the cards from their case, shuffling them, spreading them face-up on the table, freely selecting a card, replacing it face-down among the other face-up cards, and returning the deck to its box.

In the more comedic version of the routine, more focus

The Invisible deck explained in a video

Bicycle Cards In The Air
€ 5,95
In den Warenkorb