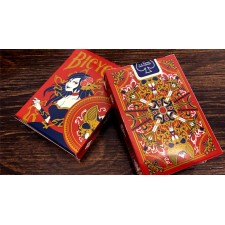 Beschreibung Bewertungen (0) Ähnliche Produkte (2)
The Vampire Playing Cards explores a slice of the western vampire. Vampires are regularly represented in literature and paintings as well as popular culture including appearances in movies, opera, animations and TV dramas. Throw in elements of myths, urban legends, modern vampire fiction and add a big spoonful of manga-styled characters will give you our latest offering.
The Vampire Playing Cards is the part two of a 2-deck series on vampires east and west. This series will feature familiar western vampires and to the peculiar epoch that makes up a substantial part of our childhood memories, one that entertained and scared us at the same time.
Designed by Sin Yee Lam & produced by HypieLab Company, a design studio based in Hong Kong.
The cards and tuck case will be printed with superior gold metallic ink. Printed on Premium stock by The United States Playing Card Company.