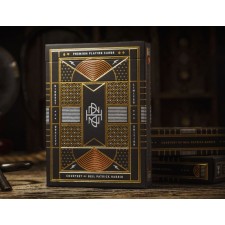 Although most people will probably know him primarily as a television and stage actor, Neil Patrick Harris has garnered a fair reputation in the magicians' world as well. It's not a coincidence a lot of his characters have a knack for magic tricks.

The NPH deck was crafted by Theory11 with art direction by NPH himself. The result is breathtaking: an elegant deck with a mesmerizing attention to detail. You'll find that the intricate goldfoil pattern that runs on the outside of the tuck box continues on the inside, and who knows which kinds of symbolism you'll discover on the inside if you go looking for it... This deck is a tribute to Neil's love for mystery, magic, and theater.

For every deck of NPH Playing Cards sold, $1 will be used to combat HIV around the world, courtesy of PRODUCT(RED).