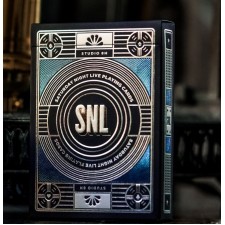 This deck by Theory11 is based on the long-running and wildly successful American comedy/variety-show Saturday Night Live.

After more than fourty seasons NBC's late night sketch comedy spectacle is as relevant as ever and this lengthy history is summarized in this deck of playing cards. Some of the most famous characters and performers from recurring sketches are featured on the court cards, such as Will Ferrell, Bill Hader, and Justin Timberlake.
The tuck box illustrations were inspired by the classic look of the set background that's been featured for the entire run on the show. Thanks to the phenomenal design skills by Theory11 these elements are integrated into the tuck design in a smart and stylish way.

Star Wars Playing Cards - The Dark Side
€ 10,95
In den Warenkorb

Star Wars Silver Edition - The Dark Side
€ 13,95
In den Warenkorb