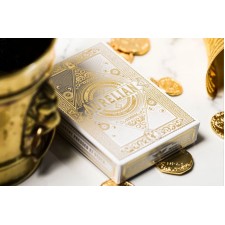 Aurelian: The Birth of an Empire

The Aurelian deck by Ellusionist is based on the reign of the eponymous emperor of the ancient Roman Empire. The creators boldly pronounced this deck the most detailed deck ever made, due to the various layers of embossing and the intricate and precise details that have been drawn by gold foil. Inside the box you'll find a pattern of oak leaves which represent the Emperor's crown.

Experience the legends of emperor Aurelian yourself with this phenomenal deck.